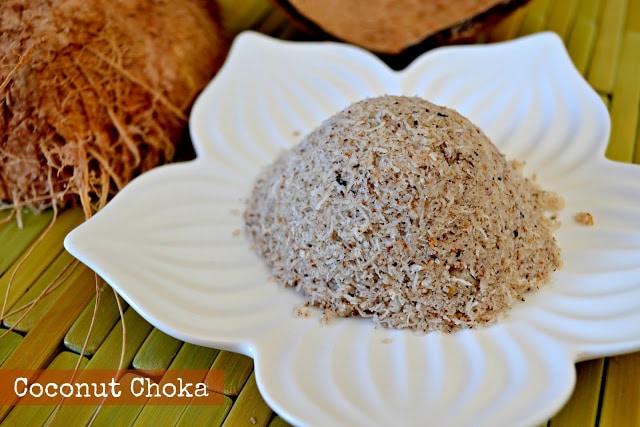 Fire-roasted coconut that has been ground into a fine texture, seasoned with lots of onion, garlic, and hot pepper, served over dhal and rice, then eaten with your bare hands, is a meal you just can't buy at a roti shop. Coconut choka is a rustic and earthy and just makes me feel like I'm home. Mom would make this only on the weekends, most times for Saturday afternoon lunch. After I ate a plate of dhal, rice, and coconut choka, all I ever wanted to do was sit on the couch and watch a good movie. I guess that's what makes comfort food, comfort food right?

Choka describes the manner in which a dish is prepared. A vegetable such as an eggplant or fish is typically what is used in making a choka. The method most times begins with fire-roasting then grinding, flaking, or mashing. Oil, raw onions, garlic, and hot pepper along with other spices of choice are added afterward for flavor. The result whether it is a fish or vegetable type choka is a smoky and flavorful dish. Read on to learn more about choka and its various forms. Although my recipe takes a slight deviation from the conventional way of making coconut choka, I thought you'd like to know how it is traditionally done. A dehusked coconut is cracked open and removed from its shell. It's chopped into large pieces then roasted over an open fire. The roasted coconut is scraped to remove the burnt layer, then grated.

Finally, the grated coconut along with additional ingredients are hand-ground into a fine texture using a lorha and sil. A lorha and sil is the vessel that is traditionally used to make coconut choka. It is comprised of two separate entities that rely on each other to get the job done, very much like a mortar and pestle. A sil is a thick slab of brick made from a particular type of stone (granite, sandstone, or limestone); the lorha is the smaller hand-held brick that is used to do the grinding. This brick is also known to many as a masala brick since it is widely used to grind spice mixtures such as garam masala.

After a continuous back and forth motion, and some pressure, the grated coconut turns into a fine paste-like texture which, believe it or not, is part of what makes this type of choka so unique and desirable. It certainly takes some time, but the result is worth the effort.

Here's a photo of a lorha and sil being used to grind coconut choka.

These days, a lorha and sil are so hard to come by. If someone in your family owns one of these, it was probably brought back from Guyana. My mom has been trying to bring one for so long now, but it just never works out. Our suitcases always end up being over its weight limit because, well, it's a huge slab of brick! And we usually have other packages of homemade condiments that take priority. My father understood why we wanted to bring one back to NY, but always thought we were out of our minds. He would make some sarcastic comment like, "Home Depot does sell so much cheap cheap brick, and you want to bring back brick from Guyana?"

We haven't been able to find any good ones in Queens, NY either. I've heard many horror stories of the sils available here being made out of a type of brick that ends up grinding itself away with the food. Can you imagine having a brick in your food? Blah! Using a Coffee Grinder My mom's challenge of not having her glorious lorha and sil has left her with no other option. She decided to use a coffee grinder instead. Brilliant. It grinds the coconut into such a fine texture and cuts a whole lot of time. She also uses a pureed onion and garlic seasoning to help achieve that paste-like texture.

Once the choka is done and mixed up with the dhal and rice, you won't even be able to tell the difference in which method was used. This recipe calls for 2 coconuts. It will make a lot of choka. If you are a family of four, I would say one coconut should suffice. 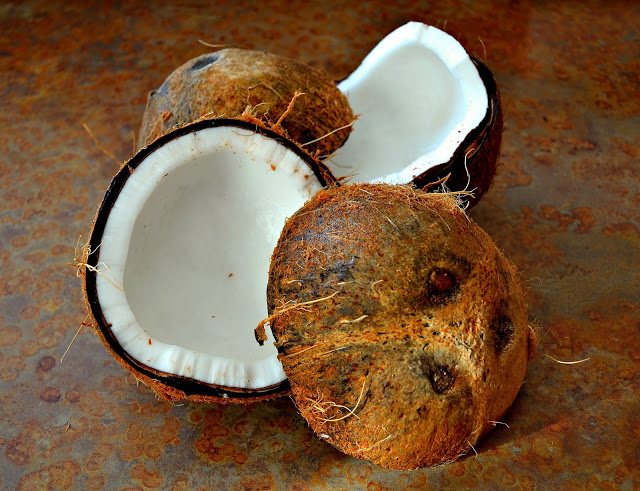 Crack coconut in half. Using a thick knife, remove flesh from its shell.

Chop into large pieces. Roast over an open fire. 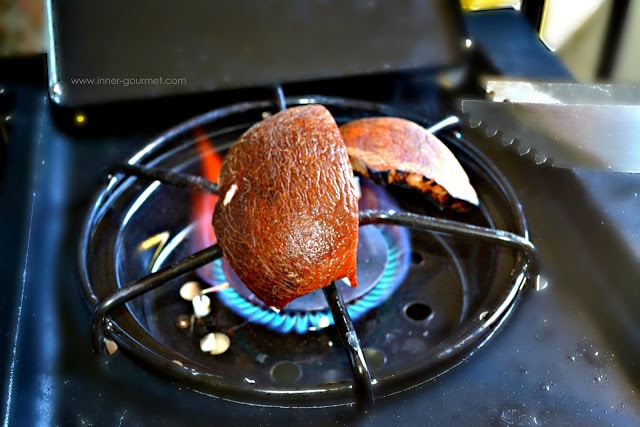 Continue to roast on both sides, until you see black patches. 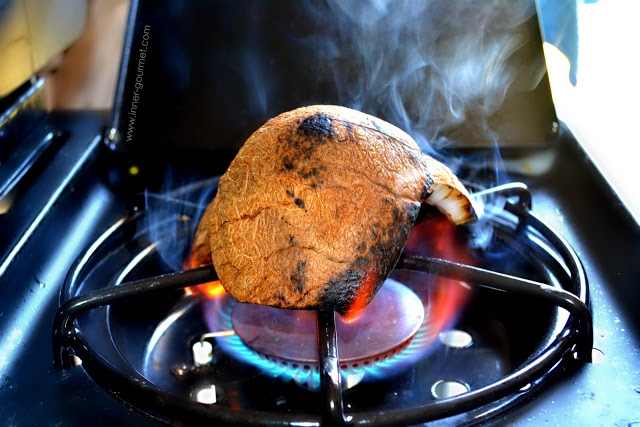 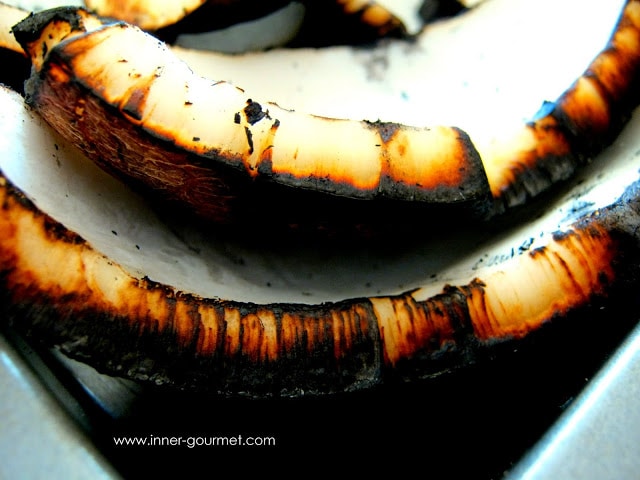 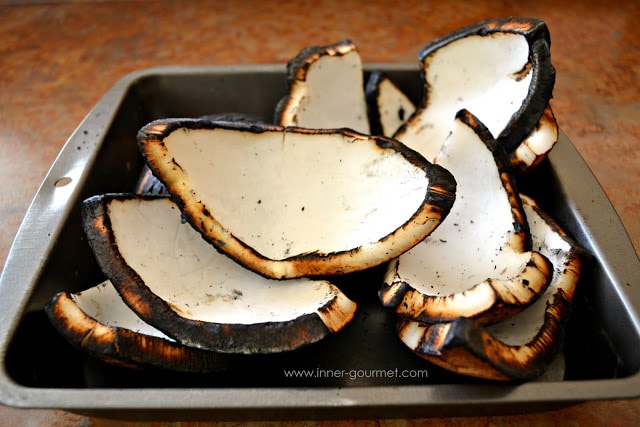 Scrape the burnt layer off of the coconut. Wipe with a damp towel. 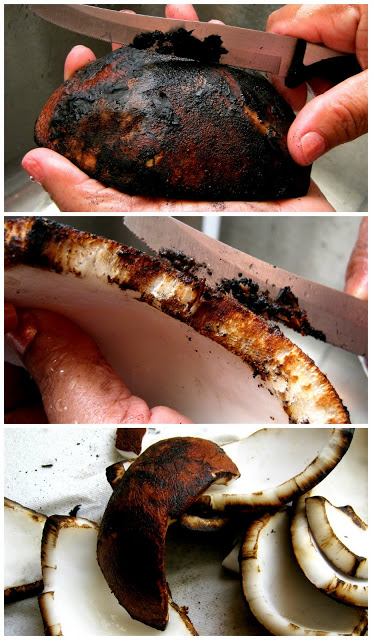 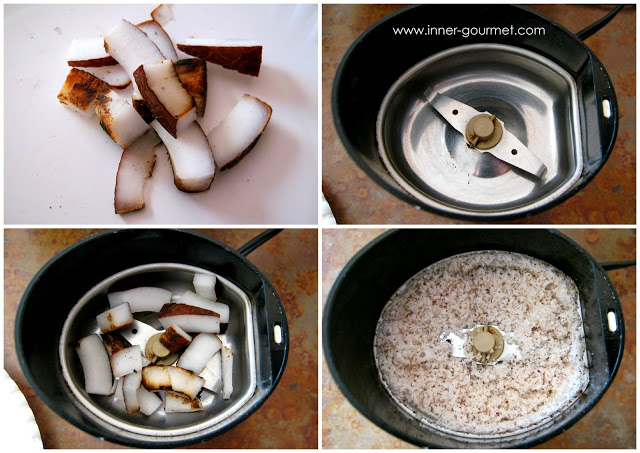 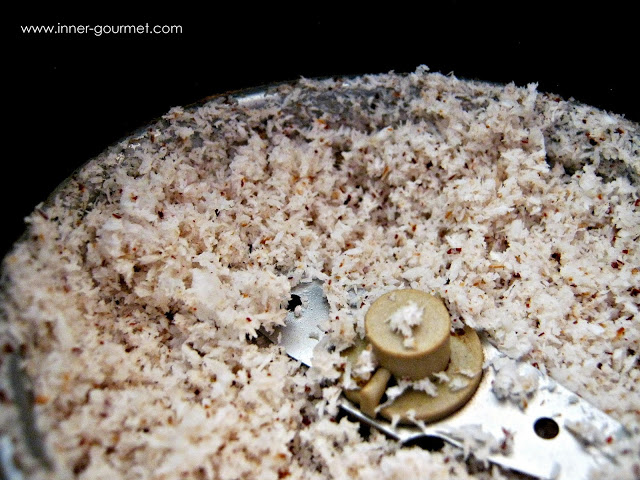 The ingredients must be blended or pureed to have a similar texture of choka made using a lorha and sil. I always have a batch of this seasoning in my refrigerator. I use it to season meat, fish, and rice, among many other things. It's simply one large yellow onion, one head of garlic, peeled, 2-3 wiri wiri peppers (scotch bonnets or red chili peppers may be used), and fresh thyme leaves. Blend with ¼ cup of water to make the puree. Store in an air-tight glass jar. 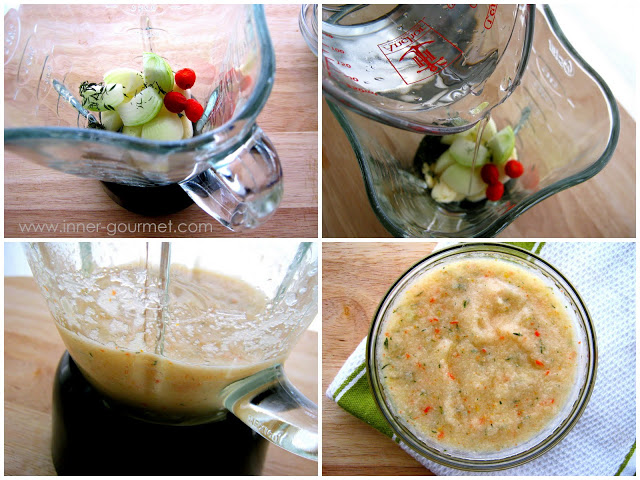 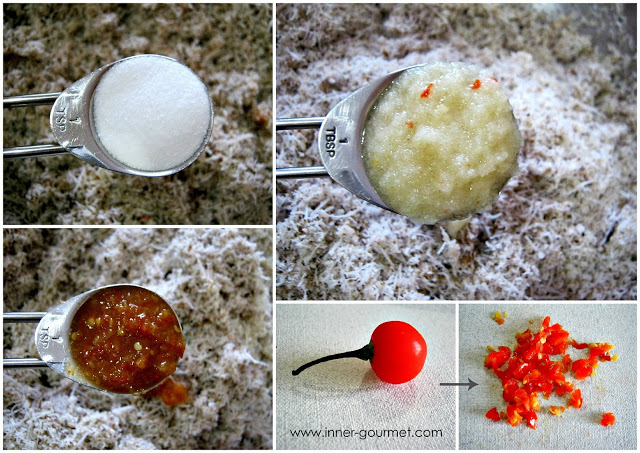 Get your hands in there and mix it up! 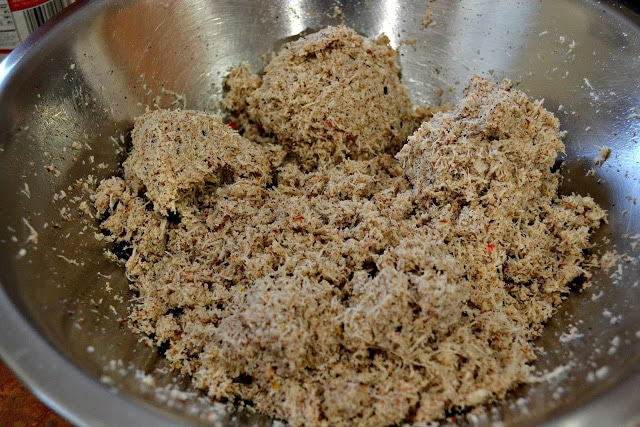 To check if choka has the right texture, press down into a bowl, it should keep its shape. This is how you know it is moist enough. 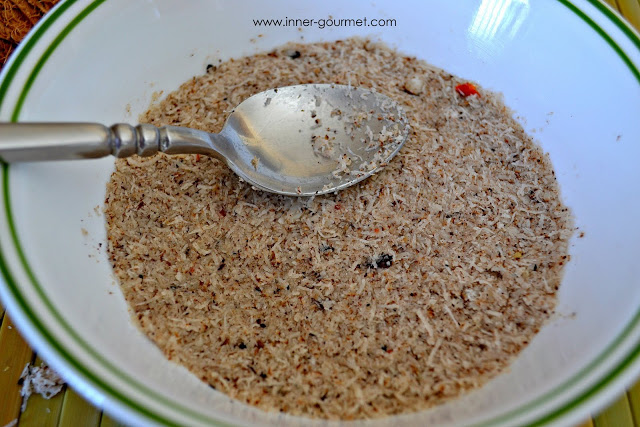 Serve with dhal and rice, then watch a good movie. 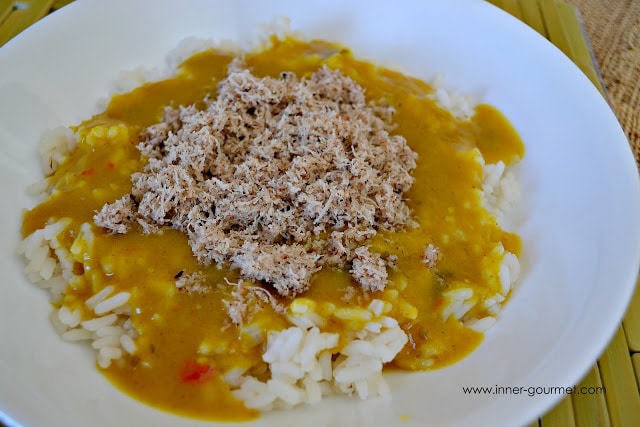