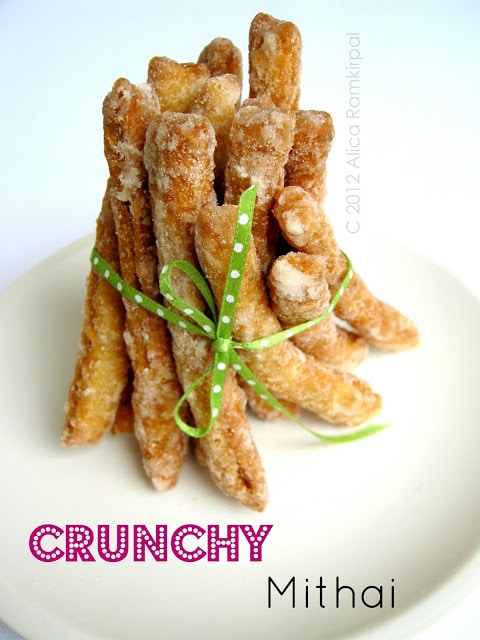 As described in the photo, these little fried sticks of dough certainly have a crunchy texture that keeps you wanting more. Sort of like potato chips; one is just never enough. What the photo doesn't describe though, is the flavor that's packed into each slender stick. Grated coconut, anise seeds, cinnamon, and ginger are all the main ingredients that unite to form this perfect union.The bold flavors from these ingredients form a perfect balance of tasty and crunchy when combined in the right measurements.
There are two types of mithai known to Guyanese. The first one is soft on the inside and crisp on the outside. Check out my grandmother's recipe for the soft type here. The second is this one, thin and crunchy all the way through. Crunchy mithai/kurma is made by mixing all the ingredients and forming into a dough ball. It is rolled thinly, then cut into strips, shallow-fried, then coated in a delicious sugar syrup. Yes, it is as divine as it sounds.

My parents used to tell me childhood stories of growing up in Guyana and buying this treat after school from a local street vendor, they mostly bought the crunchy type, which is also known as lactoe, but I haven't heard many people call it this name. In the U.S. it is also sold in little bags, just not from a street vendor. It can be found at local West Indian stores and bakeries. I would typically buy a bag or two if I happened to be at a West Indian bakery, but I usually enjoyed these fresh, after my mom was done frying them at home. She usually made them for Diwali or other Hindu religious functions to be shared with family and friends. For Diwali, she would package them in little bags alongside a serving of parsad, peera, goja (little pastries filled with shredded coconut), and gulgula (a sweet banana fritter). Mithai of both types are also quite popular during Hindu weddings. It is easy to make and yields quite an amount from a single batch of dough, which makes it great for sharing with large crowds.

I hope you enjoy my mom's recipe, I guarantee you won't be able to eat just one!

The crunchy type of mithai is known to Trinidadians as "kurma." The ingredients are usually the same, but may differ in measurements based on the person making it. 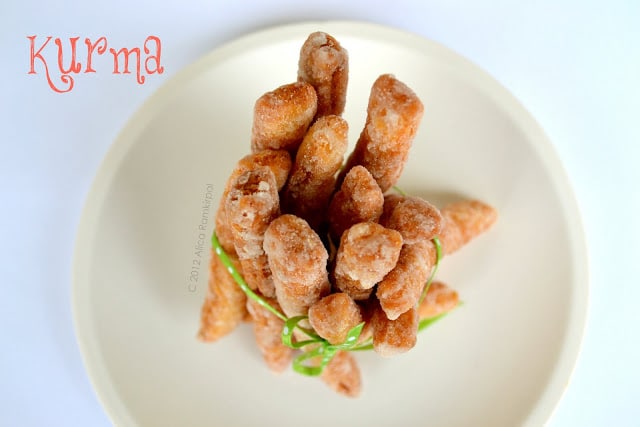 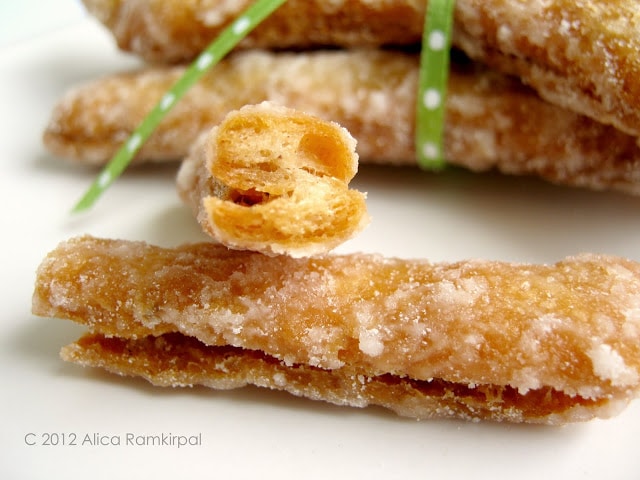 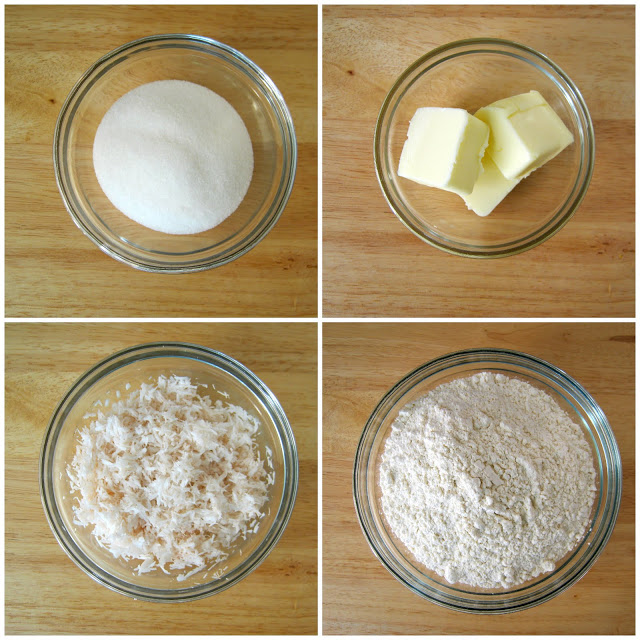 Measure ¾ cup evaporated milk and then add ¼ cup water. 1 cup liquid in total. Add grated ginger to liquid to ensure it is equally distributed in the dough. Set aside. 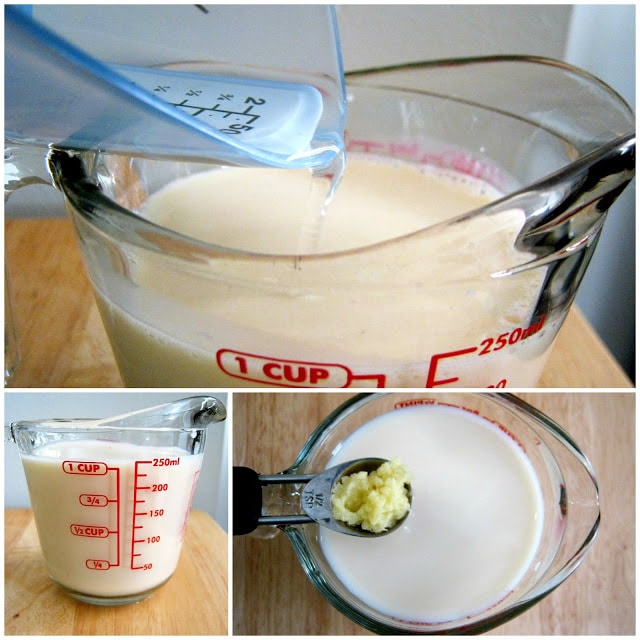 Mix all the dry ingredients. 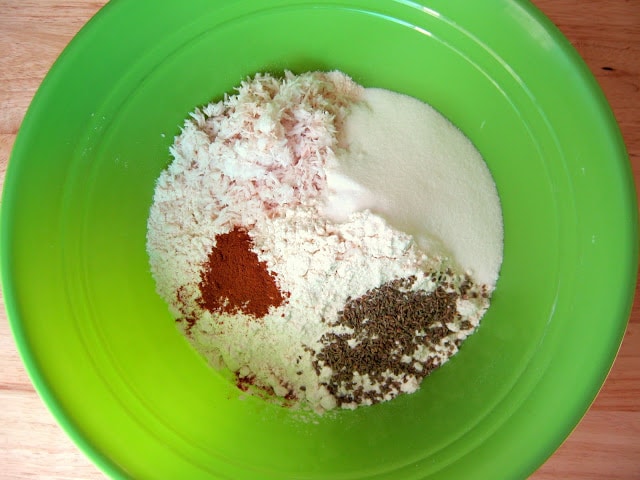 Add butter and cut into flour until small pea sizes form. I used a pastry cutter, but you can use your hand or a fork to work it into the four. Add liquid and knead into a ball. Add more flour if needed to bring the dough together. Wrap in plastic wrap and let it rest for ½ hour maximum in refrigerator. 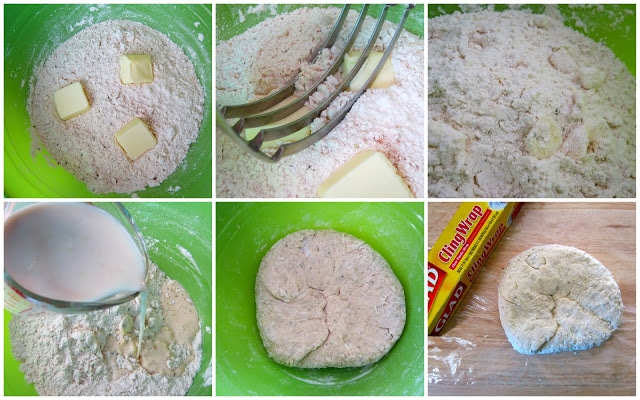 Cut dough in half and roll to ¼ inch thickness. 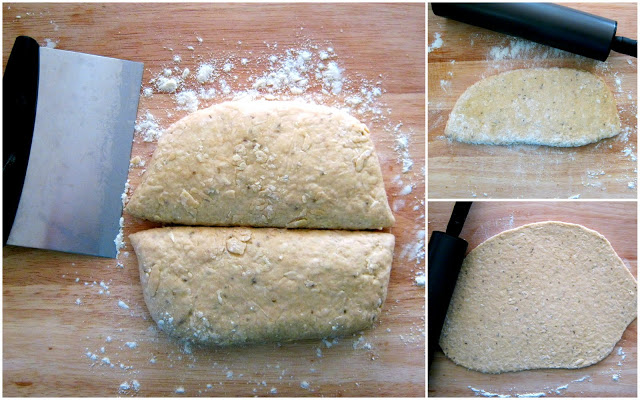 Cut into thin strips. The thinner, the crunchier it will be. Shoot for a little wider than the diameter of a pencil. Use a dough cutter or very sharp knife. If you notice the dough is sticking to the knife while you cut, just dip the knife in flour between cuts. 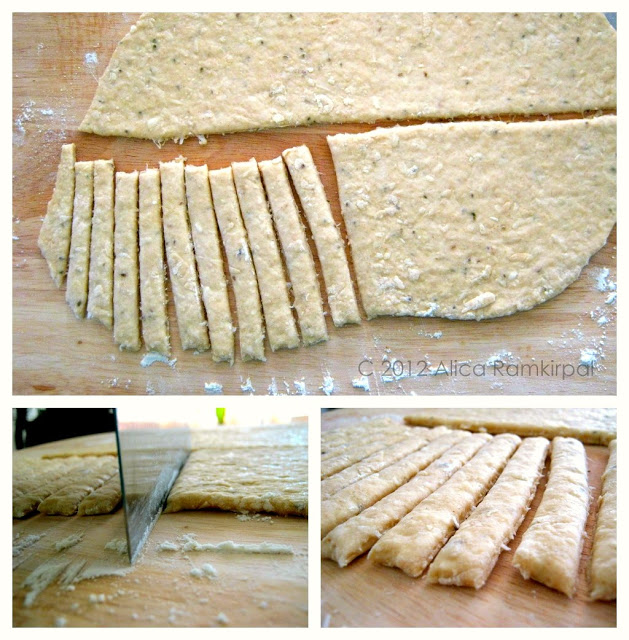 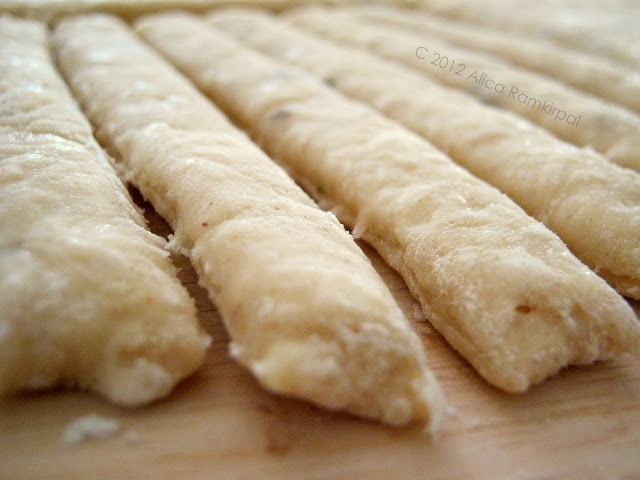 Heat oil to medium fire. Drop strips one at a time in oil. Mithai will first sink to the bottom then float. If it floats immediately, then the oil is too hot. 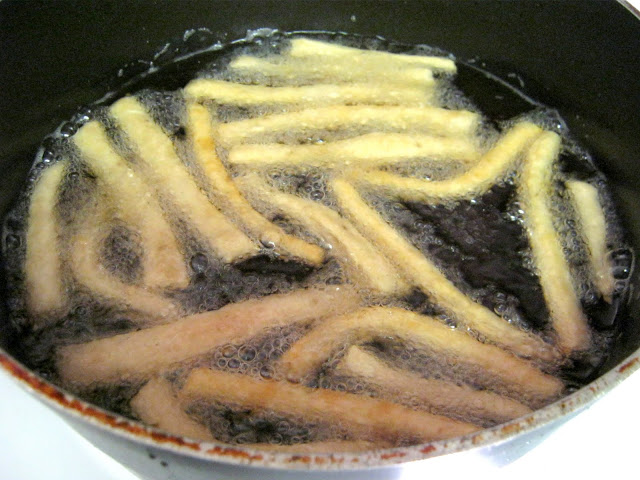 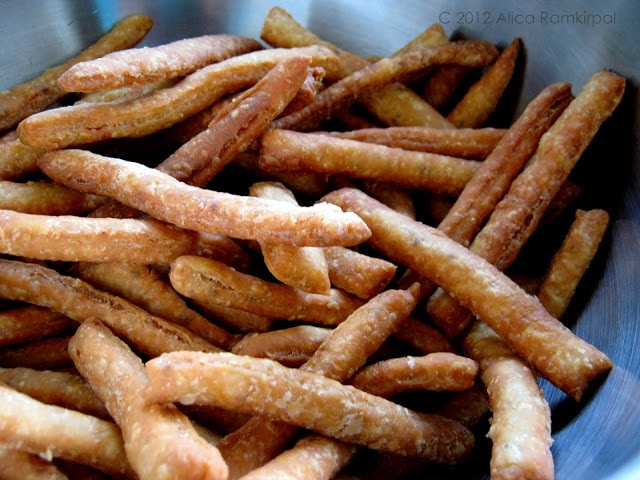 And now for the hardest part; the sugar syrup or "paag." Combine 1 cup white granulated sugar with ½ cup water. If using a candy thermometer, let mixture boil until it reaches the "soft ball" stage. 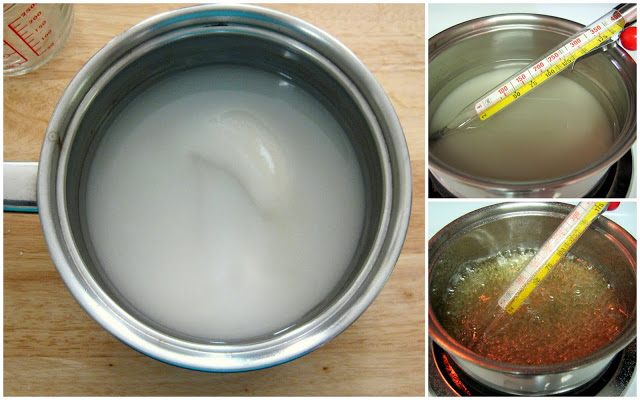 If you do not have a candy thermometer, then we will have to use the "soft ball in water test." Let mixture boil on low for about 35 minutes, or longer depending on your stove, this is why doing the sugar test is also important. To test if sugar is ready, drop a little into a glass of water, if the sugar does not dissolve but keeps a round shape, then it is ready.

If you let the mixture boil a little too long and notice that a thread forms when you do the water test, don't worry, you can still use the sugar syrup. All it means is that the sugar will dry faster when tossing it with the mithai. It will also be little bit chunky and coat the mithai heavier. This is called the "hard ball" stage.

After sugar is done, toss repeatedly, making sure to not break the mithai strips. Use a pot spoon to toss mithai. You'll begin to see the sugar drying on the strips, keep turning until sugar is dry and becomes powdery white. 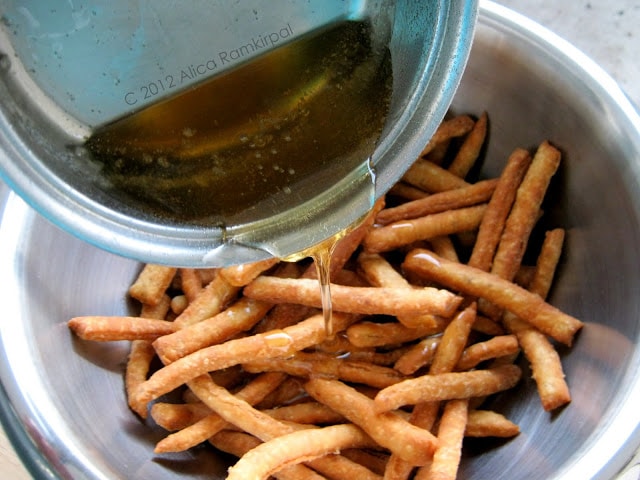 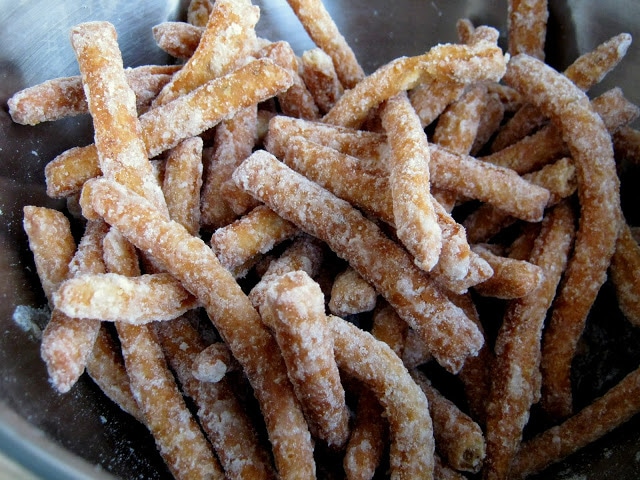 Freshly grated coconut can be found in the freezer section of ethnic grocery stores these days. I have used the Birds Eye brand numerous times and it works perfectly. This is what it looks like. I have found other brands at local Indo-pak stores as well.

1 tsp Bird's custard powder can be added to the dough mixture for added flavor.

When cutting dough, if dough sticks to the knife, dip knife in flour in between cuts.

If you feel more comfortable using a thermometer, this is the one that I have, it was pretty cheap and is reliable.

When heating the oil, you'll want a medium fire. The Mithai will first sink to the bottom then float. If strips float immediately upon dropping into the oil, that means the oil is too hot. Your mithai will be soft on the inside and not crunchy enough.