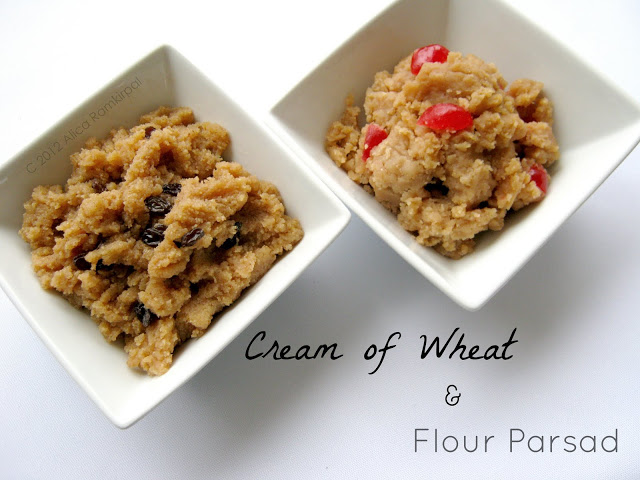 If there were ever a dish that brought back young childhood memories of growing up in a Hindu home, it would have to be parsad. We had so many jhandis and poojas in my house that making parsad in the kitchen became a norm. This bread pudding-like dessert is something that is only available at these types of Hindu religious functions; it cannot be found at a local roti shop. Makes it all the more desirable. I remember attending countless numbers of jhandis as a young girl and usually by the end; I was so hungry that I couldn't wait for the brown paper bags to be distributed, because I knew parsad would be inside. I know I can't possibly be the only one who has felt this way, right?
Many of you who have never attended a jhandi might be wondering what the heck I am talking about. Well, in short, jhandis are Hindu religious ceremonies, where devotees pay adoration to Hindu deities by offering mantras (often facilitated by a priest or swami), flowers, fruits, and homemade sweets. These ceremonies usually last anywhere from 2-4 hours and are attended by family and friends of the person hosting the jhandi. Once the ceremony is over, guests are offered a vegetarian meal and a variety of sweets usually packaged in brown paper bags. One of the main sweets in the bag is this glorious parsad I speak of. 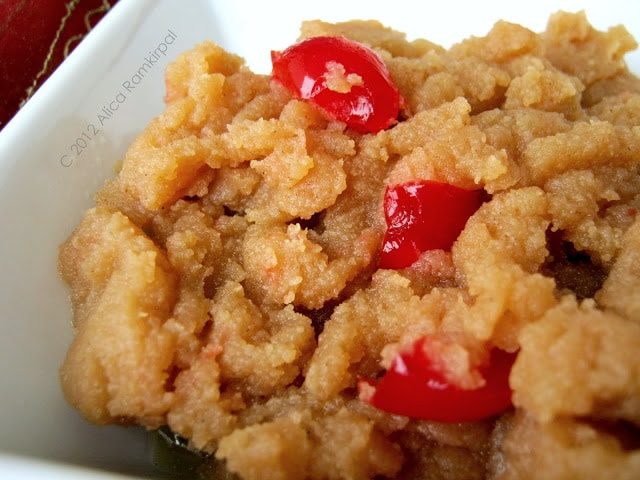 The highlight of the "after-jhandi" for me was the paper-bagged sweets. There were usually two zip-loc bags inside; the ugly stepchild, which was the bag that was filled with small pieces of cut up fruit that people usually never ate, and the other bag contained the good stuff. The good stuff is what I like to call, "jhandi sweets trio"; peera, parsad, mithai. These were the sweets that were all made by hand and required a labor of love; it was the bag that most people looked forward for after these religious functions were over. The best part was eating the piece of the parsad that was sitting right under the peera, because it had an extra sweetness to it - does anyone else know what I am talking about here? It wasn't uncommon either for people to ask to take home a paper bag or two for their cousin's aunty's neighbor. Yea, we know who that second and third paper bag was really for.

Parsad, which I believe originally started as prasada, means divine offering. It is also known as Mohanbhog, meaning offering for the lord (Mohan, one of Lord Krishna's 108 names and bhog, meaning prasada), and is traditionally offered during the prayer ceremony. A separate batch of parsad made without salted butter is usually offered to guests after being blessed by the officiating pandit or swami.
The ingredients in parsad generally include sugar, milk, flour, and clarified butter, which is also known as ghee. The cream of wheat version is also quite tasty and equally as popular. I can never seem to choose which I like the best, hence why I've made both. When my mom made parsad for use as offering in any prayer ceremony, she made it solely with pure ghee, flour, sugar, and milk and sometimes semolina or cream of wheat. Whereas the batch that was being served to guests was usually made with part butter (salted or unsalted) and part ghee. The reason that only a small about of ghee would be used is because ghee can sometimes have an overpowering taste. It also had the addition of various spices, cherries, raisins, or nuts. This dessert is made by parching all-purpose flour in hot ghee until a brown paste forms. Warm milk is added to the paste and stirred vigorously until a fluffy, smooth, and buttery pudding comes about. Sounds simple, right? Well believe or not, there is a technique involved here and it comes from learning how to properly parch the flour in the ghee until it becomes a dark brown color, all without burning it. 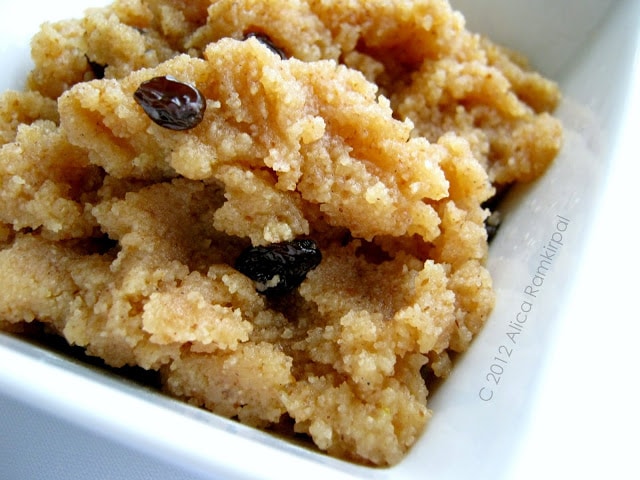 This past week I practiced making my mother's recipe to get it just right for Diwali, and also to share with you all. Although it seems complicated, once you do this a few times, you'll easily become an expert. The key to making a tasty parsad is getting the right color when parching the flour. Have you ever seen parsad that looked "whitish" and pale and also had a sort of raw-ish taste? Well that comes from not parching the flour enough and also adding too much ghee.

These two recipes belong to my mom. I always loved the brown color and taste her parsad had. She always made both versions, the cream of wheat one and the original flour-based one. Since this pudding is highly customizable, feel free to add anything you like, such as golden raisins, cherries, peanuts, pistachios and even cream soda.

Let's start with the flour-based parsad which most are familiar with. 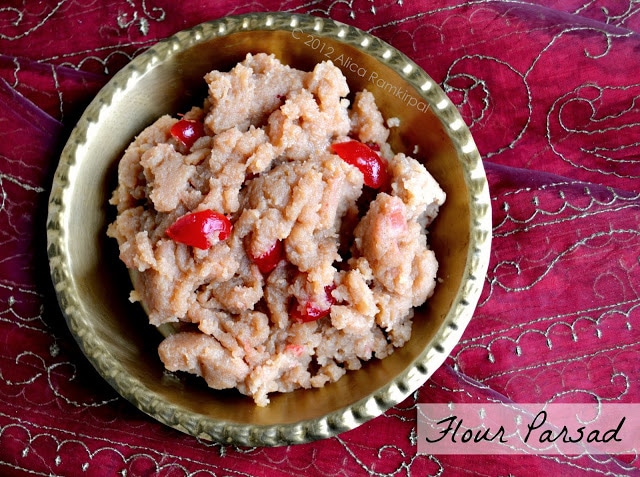 Various spices are added to the mix, my mom always included cardamom/elaichi, it gave the parsad a really nice flavor. You won't need too much though, just about a ¼ tsp, ground. 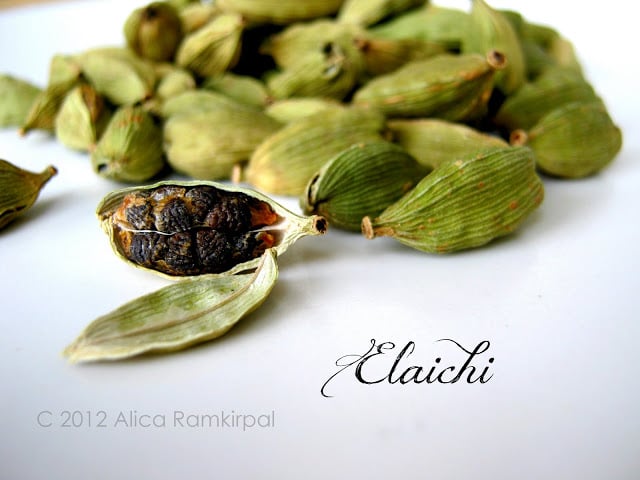 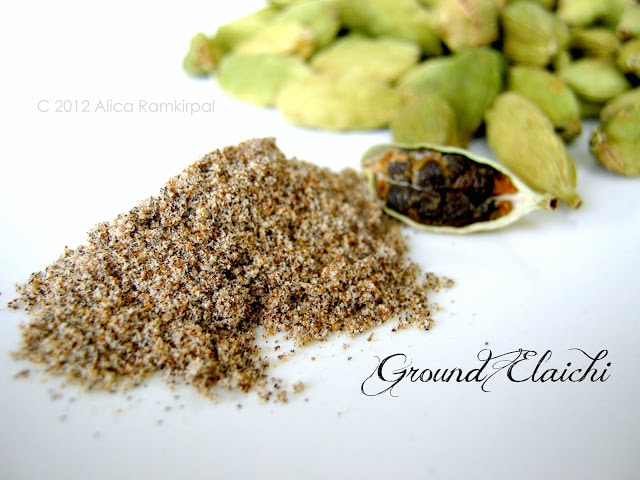 Gather all the spices, place in a small dish. 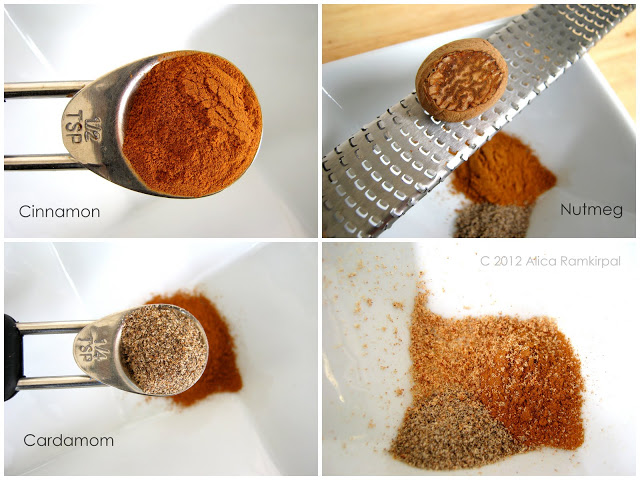 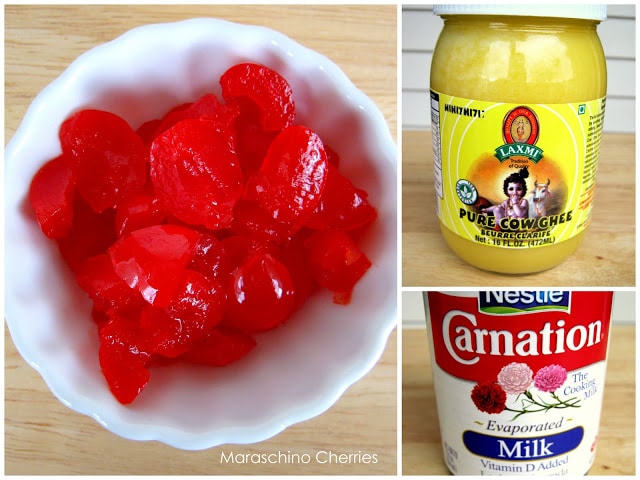 Add evaporated milk, ¾ cup granulated sugar, and spices to a pot. Warm milk mixture on stove. Keep warm until ready for use. 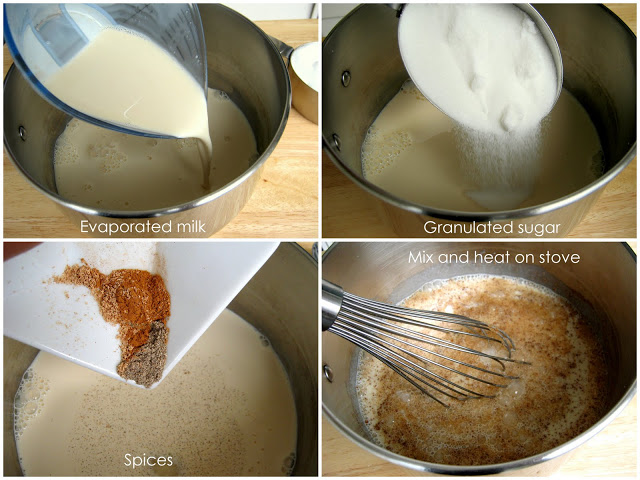 Measure 4oz butter, 4oz ghee, and 1 cup all-purpose flour. Set aside. *You may use all butter or all ghee, this is your preference. Heat butter and ghee on medium heat until melted. Add flour and stir to dissolve. 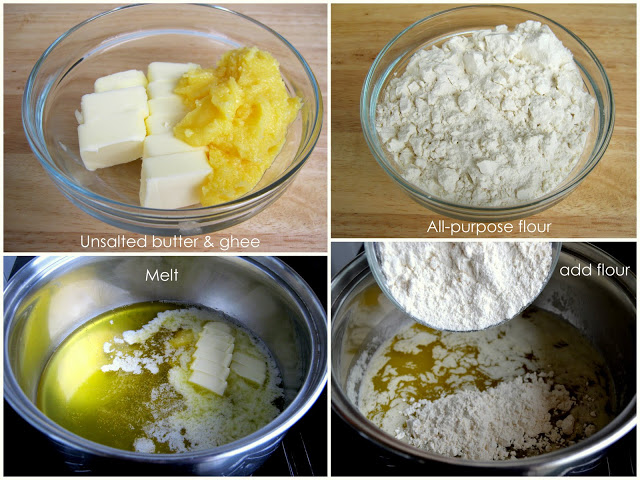 Continue to stir until mixture thickens and forms a paste. 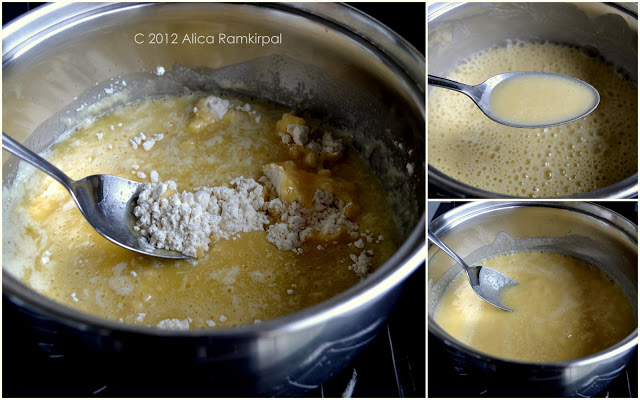 This is the part that will take some time and will probably give your arm a little workout. Turn heat to medium-low and stir continuously (parch) until a golden to dark brown color is apparent. This should take anywhere from 15-20 minutes. I would advise that you do not walk away from the stove, this mixture can burn easily which is why it is important to stir continuously until color is achieved. 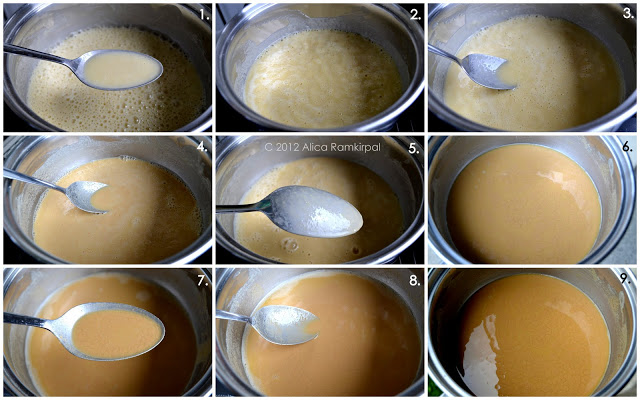 Once mixture has become golden to dark brown, slowly pour in warm milk. Stir until mixture becomes thick, add cherries. It will start to come together quickly, so continue to stir vigorously until the pudding leaves the sides of the pot, this is how you'll know it is done. 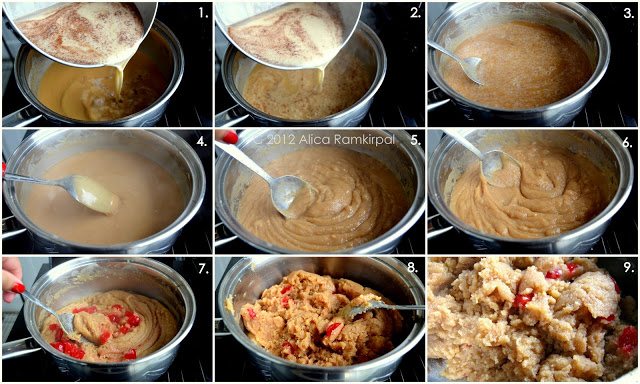 I know you'll be tempted to taste once it is done, go ahead, no one is looking. 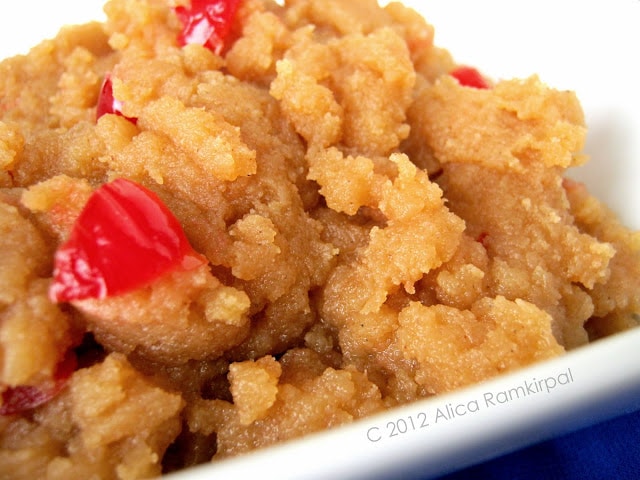 Are you a fan of the semolina or cream of wheat version? If so, take a look at how my mom makes this delicious and slightly grainy pudding. 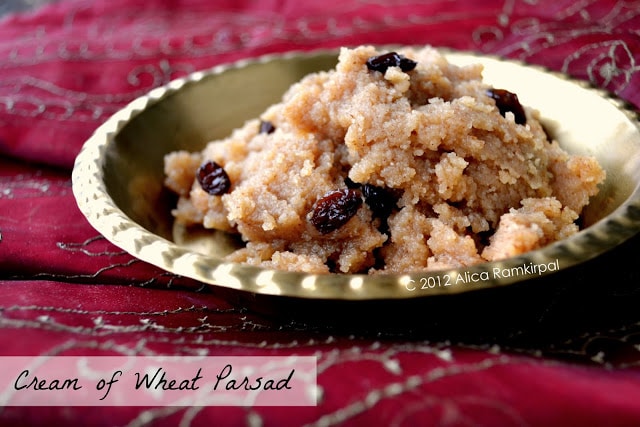 These are the brands I used. I also used just a handful or raisins. You can include golden raisins, currants, cherries, or any other addition you prefer. 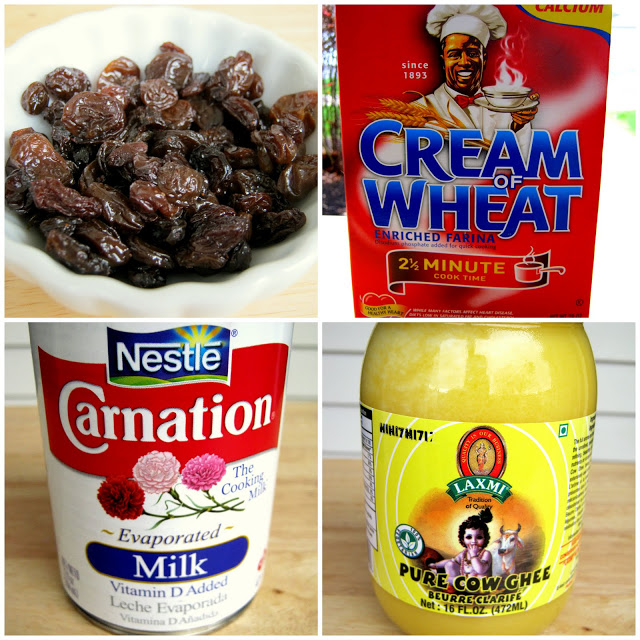 Mmm look at those wheat kernels! 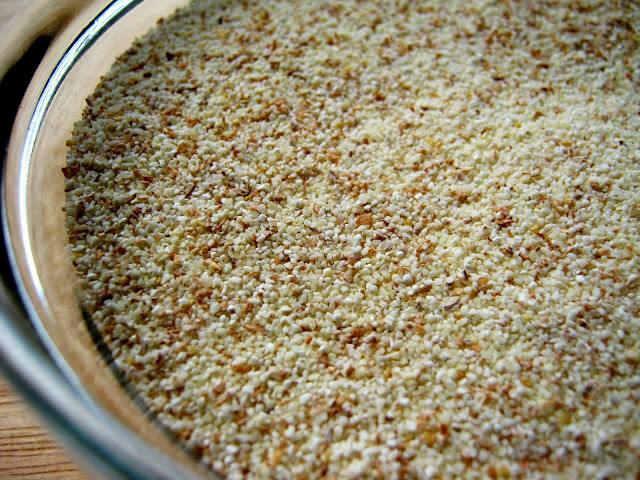 Similar to how the flour-based parsad is made, gather the same spices, set aside.

Add spices and this time, only ½ cup of granulated sugar to 16oz evaporated milk. 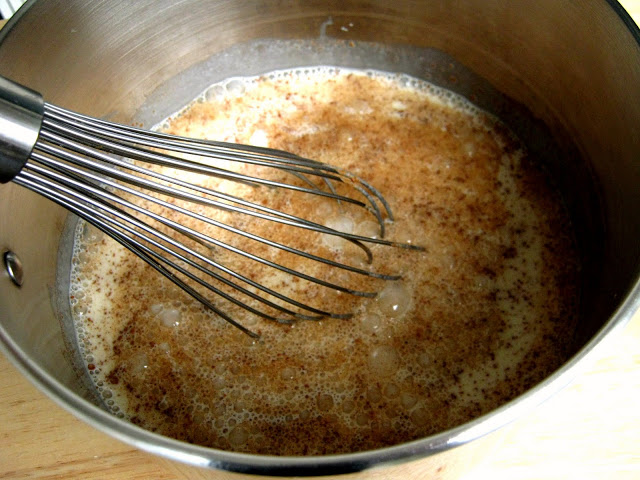 For this type of parsad, you won't need as much ghee or butter. Start with 6oz butter or ghee or 3oz of both. Melt in a pot then add flour, stir to dissolve. Add cream of wheat kernels next. Parch until mixture is golden, but not dark brown. 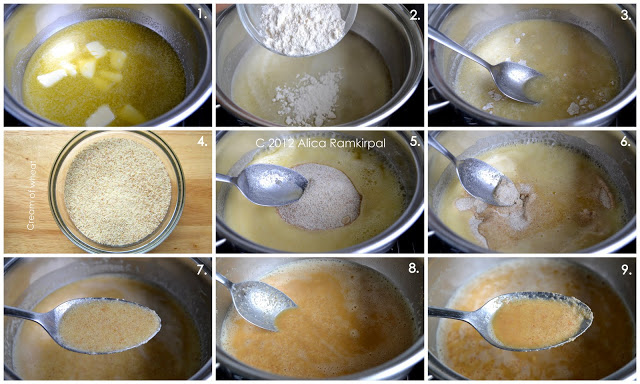 Add milk mixture and raisins, continue to stir until mixture is thick and pulls away from sides of pot. 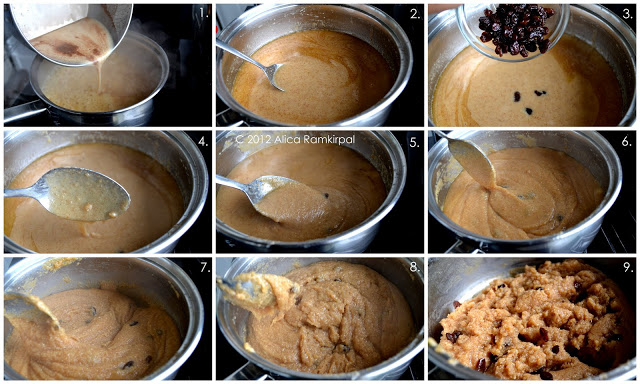 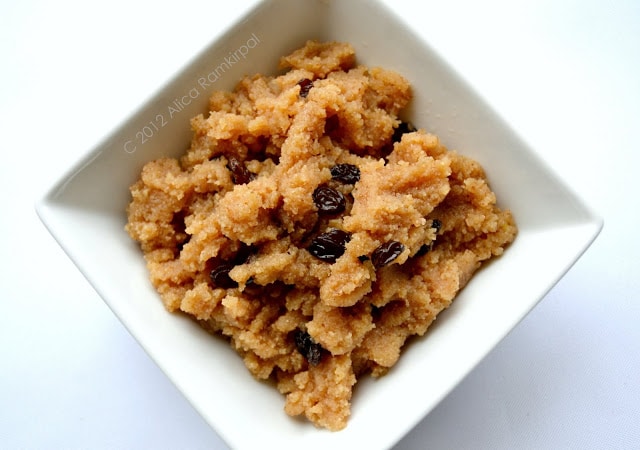 This pudding can made in many different ways, many include peanuts, 7up soda, cream soda, orange soda, and even with eggs (commonly called sirnee). Add whatever you prefer.

Although I didn't use one here, a cast iron or caharee is commonly used to make this as it can help with achieving the brown color faster.

When adding warm milk, be sure to add slowly because it can pitch out of the pot and burn you. 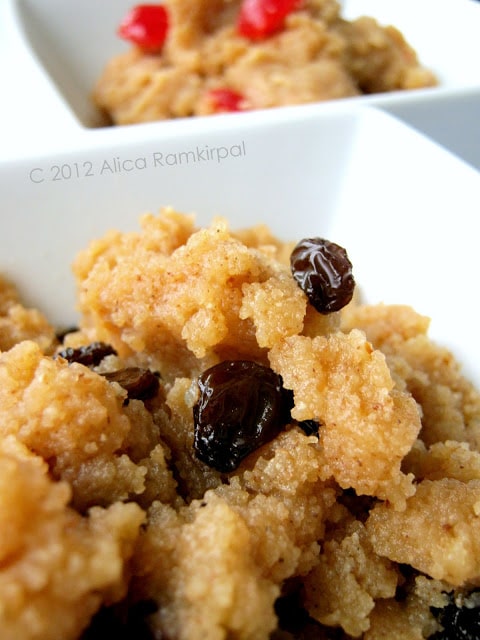